The VIII Rafael Manzano Prize for New Traditional Architecture has been awarded to the Portuguese architects Antonio María Braga and Alberto Castro Nunes who have become of remarkable importance in the field of implementing Portuguese architectural traditions, both in terms of the development of new buildings – classical and vernacular – largely commissioned by different public administrations, and the works on pre-existing buildings. When carrying out this work, their strong commitment to natural materials and traditional construction crafts is clear. They aim for their works to be characterized by their durability, sustainability and beauty. Each of them represents a real manifesto on civic education, respect for the character of the place it is located in, humanism and dedication to the community. Generally speaking, they are works of a small-sized scale, or fragmented into elements capable of retrieving it. They are able to heal the urban fabrics in which they are inserted, retrieving their balance with the local nature and culture. Moreover, the use of classical and vernacular forms is not exempt from creativity and originality, which is a solid proof of their architectural mastery.

VIDEO Presenting Alberto Nunes and Antonio Braga and their work

Video made by Irene Pérez Porro presenting the work of Alberto Nunes and Antonio Braga, for which they have been awarded the Rafael Manzano Prize 2019. 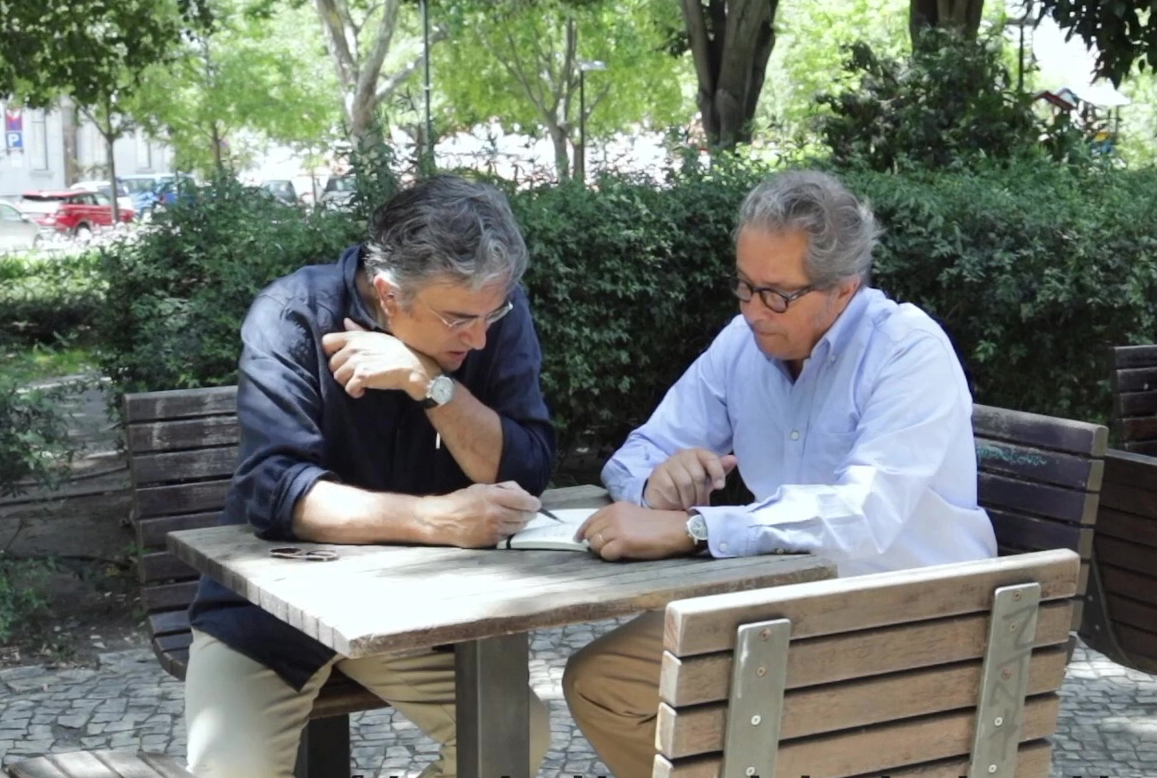 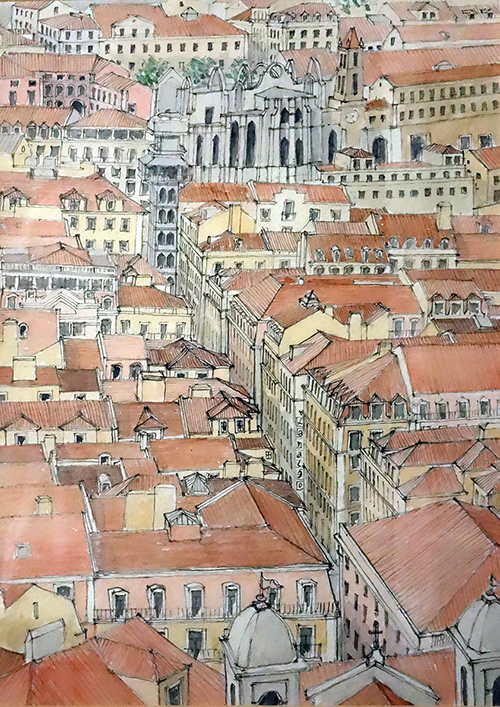 Antonio María Braga and Alberto Castro Nunes started to work together during the mid-80‘s, a moment in time when Portuguese legislation almost impeded working with any materials apart from reinforced concrete. Their concern relating to progressively introducing other traditional materials – which articulated in a more respectful way their designs and constructions -soon became a constant exploration of new formulae to convey additional solidity, functionality and harmony to their works.

Among their numerous works one can highlight the following:

– The Courts of Vila Nova de Foz Cõa, Guarda, carried out in 1989 and located in the Main Square of the town, where one can find two of the main historic buildings: the Town Council and the Parrish House. They designed an L-shaped building which completes and defines the aforementioned public space, with an octagonal tower placed in the corner which gives access to it and is placed in the central axis of the square. The regular rhythm of the vertical openings and the axiality of this access contribute to underlying the public nature of the building as opposed to other more vernacular architectures which accompany it around the square.

– A few years later, in 1994, they finalized the first phase of the ANIM, the National Record of Moving Images (Arquivo Nacional da Imagem em Movimento) located in Bucelas, Loures, and whose construction would be prolonged by means of successive extensions until 2004. It is an institution, we could say, almost unique in its genre, destined to hold, preserve and restore the Portuguese filmic heritage. It is, by the demand it requires space-wise, the largest building they have built until today. Its 8000 square metres are distributed in different buildings, organized around different courtyards. Each one of them was developed with a more classical or more vernacular architectural language, depending on the needs to be satisfied in each case and also on the particular moment when they were built.

– More towards the south, in Odemira, Beja, they were going to carry out an important complex of public buildings from 1995 onwards. These actions started by saving the building of the Town Hall, whose demolition was already being planned at that moment. Instead, they carried out its refurbishment, they transformed it and extended the existing building dividing its expansion into a series of differentiated volumes. this way the hierarchy of the buildings was maintained and the scale adequate to the square. Thus, today, the square is still presided by the Town Council dating from the 19th century. Moreover, in 1997 they designed a Municipal Exhibitions Centre which configured another of the elevations of that same square. It is accessed via an open arcade on the ground floor, which provides a pleasant and space in the shade where one is able to take a seat in this important node of urban life within the municipality. Lastly, in the year 2000, they developed the public library of that same locality, however placed in a different area: on top of an elevation which dominates the valley of the River Mira and, therefore, with great presence within the local landscape. Thus, it has a more urban and classical elevation towards the centre of Odemira, and a more vernacular kind of front – with towers and archeries with very low springs – which overlook the valley. These archeries act as a covered alleyway connecting the upper part with that of the river, overcoming the drop in height which has been used advantageously to place an open-air theatre in it.

– Close to Odemira we find the Casa do Peter, carried out in 1999, with typical forms and materials of the region, among which we can highlight stone, wood and the resplendent whitewashings.

– In that same year, in collaboration with Léon Krier, they developed the Archaeological Museum in Odrinhas, Sintra. Located next to the Roman ruins excavated in the surroundings of the attractive and simple chapel of San Miguel, the programme for the museum was separated into a series of interconnected buildings, each one destined to different functions. The decomposition of the building into several bodies enabled the configuration – both with these and the pre-existing volumes – of beautiful spacious open public spaces, creating a vernacular acropolis with the ultimate aim of articulating the entire area of Odrinhas. Among the several erected buildings, one can highlight the basilical nave which holds the main Roman lapidary collection, the volume which holds the library and the cylindrical space used for video screenings and theatrical representations.

– In the surrounding areas of this Museum they also carried out the School of Arts and Crafts of Odrinhas, originally planned to give technical training in the fields of the many restoration works that the archaeological vestiges arisen from the adjacent site demanded during different moments. Today, it is dedicated to the training of different artisanal crafts. It is distributed around a triangular courtyard and the shape of each was given a different character. The building which holds the classrooms and offices has an open archery opening towards the courtyard at ground level and a loggia above it. The workshops are covered by a wooden structure which continues over the courtyard to create a porch with wooden posts acting as its sustaining elements. The facades of both buildings towards the courtyard are much disfigured today due to a recent unfortunate intervention, which invalidates the capacity of these systems to control the temperature during the different times of the year of the spaces connected to them. Towards the street, a tower indicates where the main access is located, and at the top of it we find an indoor room with a beautiful wooden structure.

– Continuing their relationship with cinematography, they carried out the headquarters for the Portuguese Cinematheque in Lisbon, opened in 2003. The project parts from the premise of the restoration and refurbishment of a historic building located in number 39 of the Rua Barata Salgueiro. This building is the heart of the Cinematheque, and, wrapping it, various volumes were erected, extending themselves towards the inside of the block to create a large courtyard towards which a series of other spaces open: a cafeteria, a bookshop and a luminous double-height gallery. This last element connects the new elements with the former building and the screening rooms located at the ground floor. For this space they designed vertical supporting elements and hand rails whose details connect this space with its function, being inspired by rolls of film, spreading out from one element to another.

– Going back to Alentejo, they carried out the Public Library of Portel, which completes and reshapes the surroundings of the Convent of Saint Paul, and, in 2016, they developed the Visitor Center of Nature and of the Cork Oak Grove of that same locality, erected within the complex holding the Chapel and the Church of Saint Peter. The ruins of the constructions of this site – which, in the past, sheltered those who went on a pilgrimage to this place – were reconstructed and expanded.

They have regularly written for newspapers and magazines on these topics. Their role is also especially relevant in the promotion of the new traditional architecture in Portugal.

In their last works, they have only used natural and local materials and they consider one of their greatest successes to be being able to build private dwellings without making use of a single sack of Portland cement. 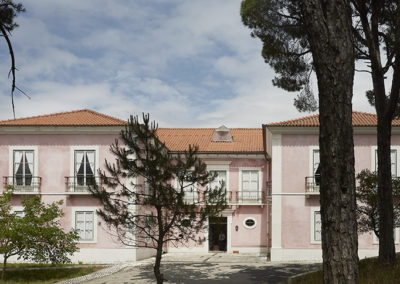 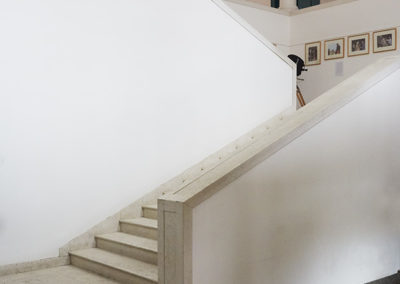 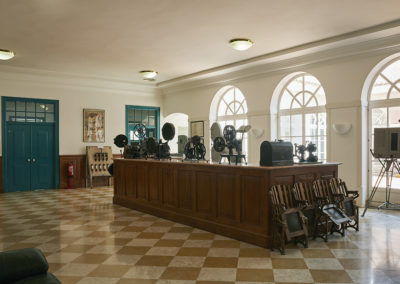 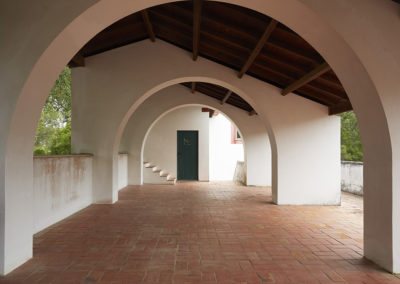 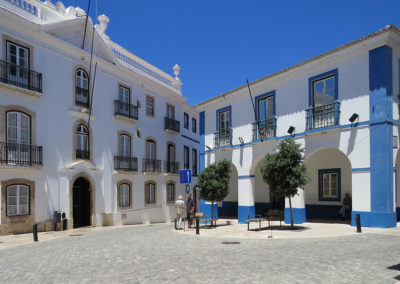 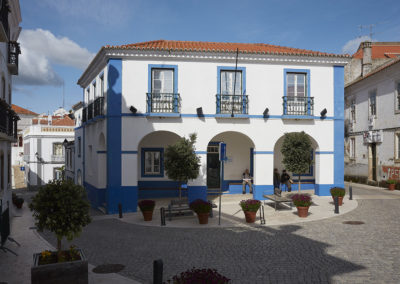 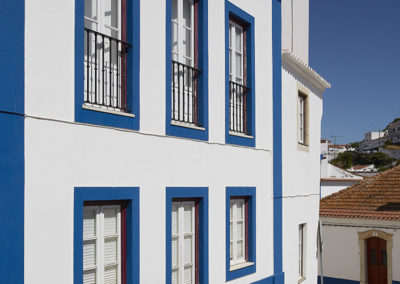 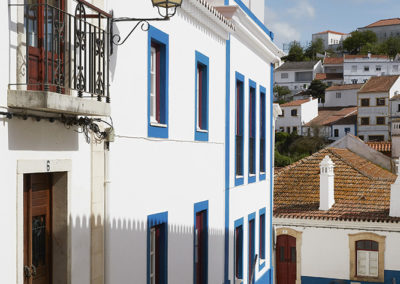 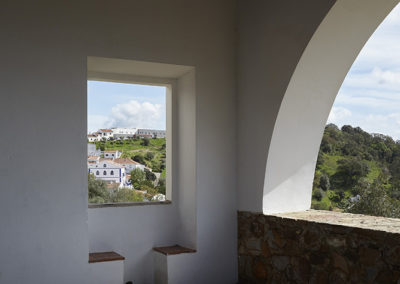 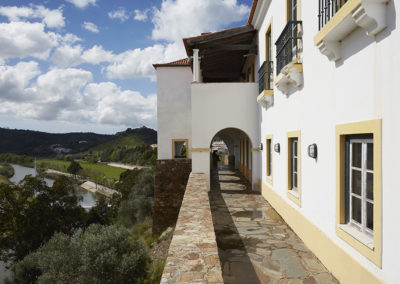 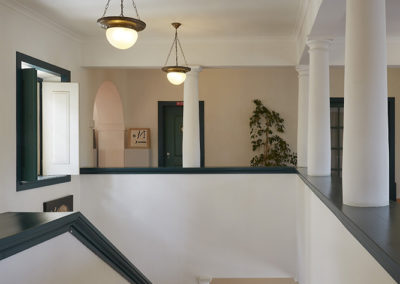 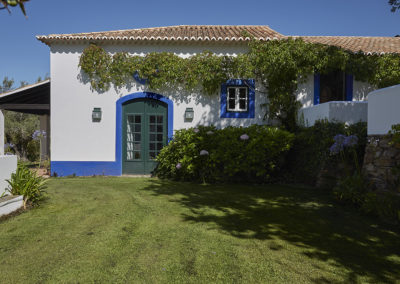 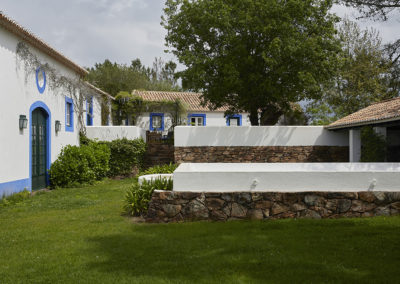 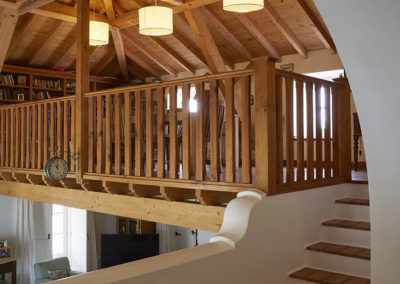 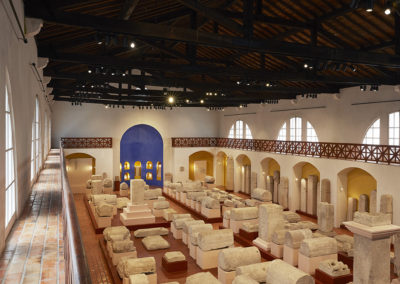 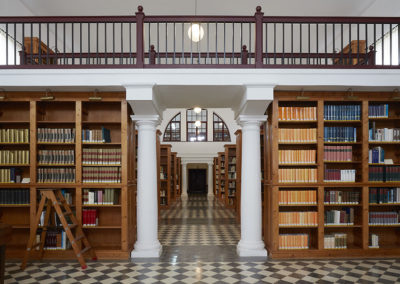 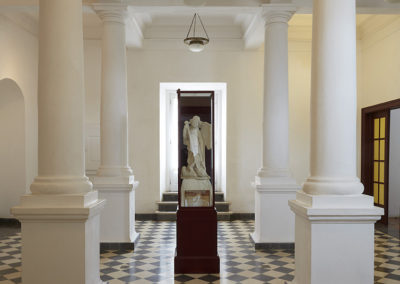 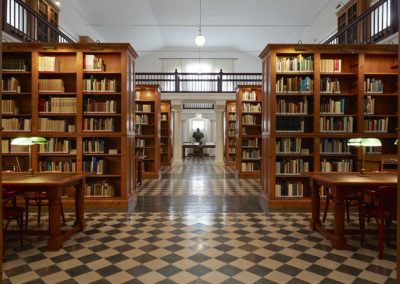 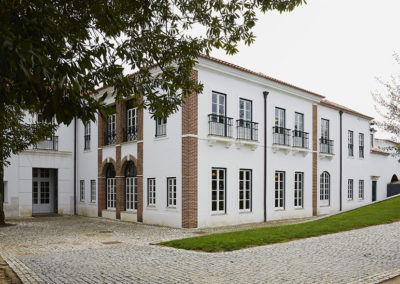 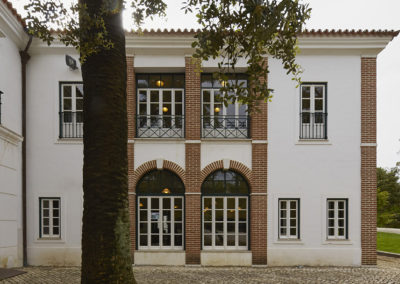 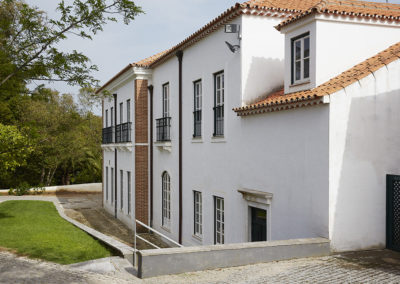 Visitor Center of Nature and of the Cork Oak Grove, Portel, 2016 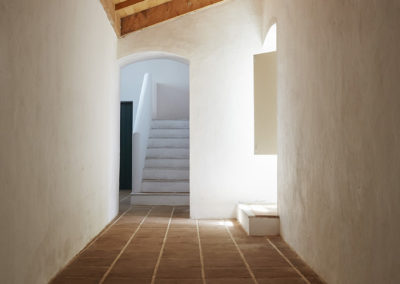 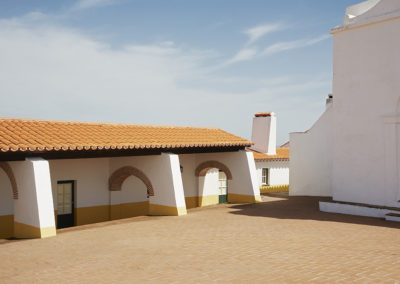 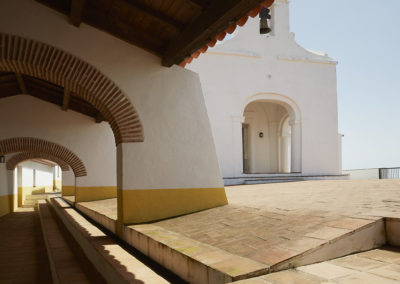 The event was chaired by H.R.H. Pedro de Borbón Dos Sicilias, Duke of Calabria, Mr. Richard H. Driehaus, american philantropist who support this initiative, Fernando de Terán, president of the Academy (RABASF); Robert Adam, chairman of INTBAU UK and of the Jury of this Prize and Rafael Manzano Martos.